Give us a call for an appointment

See our premises and equipment

Total Oral Rehabilitation therapies aiming to a painless and minimally traumatic experience to the patient.

Diagnosis and treatment of diseases of the oral- jaw complex.

Anyone with missing teeth understands how tooth loss can make you feel uncomfortable. Dental Implants are the primary solution of replacement of one or more missing teeth.

Radiological study of diseases of oral-jaw area including the disorders of temporomandibular joint/orofacial pain.

Evidence-based and well documented therapies of Guided Bone and Soft Tissues Regeneration are performed at our surgery.

The specialty of Oral Surgery includes the surgical pathology and surgical treatment of diseases of oral cavity (teeth, gums, jaws and mouth) that can be treated at the level of dental surgery practice. 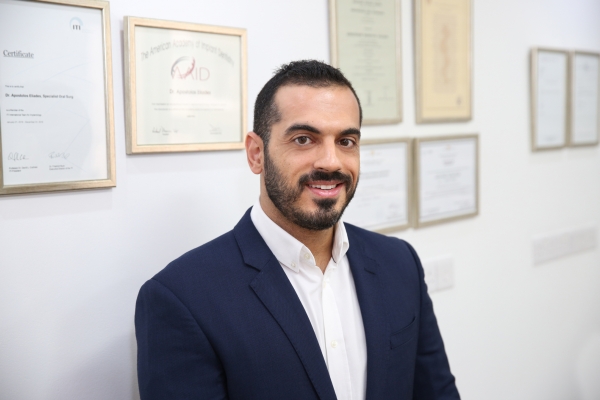 Dr. Apostolos Eliades was born in Limassol in 1985. In July of 2003, he achieved the first position for the Dental schools of Greece in the entrance examinations of the Ministry of Education of Cyprus and obtained an honorary scholarship from the State Scholarship Foundation of Greece. So, at the end of his military service in September 2005, he started his undergraduate studies at the Faculty of Dentistry of the Aristotle University of Thessaloniki, maintaining the honorary fellowship for five academic years. He graduated in July 2010, among the top graduated dental students of that graduate period.

After his graduation, he practiced for two years as a dental surgeon in Thessaloniki, a practice which was a prerequisite for the subsequent three years of his postgraduate studies. Then, he completed the three-year full-time clinical program of specialization in Oral Surgery, Implantology Surgery and Radiology at the Department of Oral Surgery and Oral Medicine at the Aristotle University of Thessaloniki.

He graduated with a Distinction degree and gained the title Master of Science (MSc) in Oral Surgery and Oral Radiology in July 2015. In September 2015, the Cyprus Dental Council recognized Dr Eliades as a Specialist Oral Surgeon and secured his entry to the Specialist List of Oral Surgery of Cyprus.

During his studies until today, he has direct interest in the field of specialty of Oral Surgery, Implantology and Oral Radiology and gets involved in research studies and protocols. Series of articles and research papers were published in Greek and foreign journals of his specialty. Moreover, he got several awards and participated with number of announcements and presentations in Greek and international conferences and seminars.

Since 2015 he is a member of the ITI (International Team for Implantology), American Academy of Implant Dentistry and British Association of Oral Surgeons.

In his well-equipped clinic, he accepts patients of his specialty and deals with the diagnosis and treatment of oral and dental diseases requiring surgical intervention.

The Oral Care Clinic is at the forefront of innovation and technology. We focus on giving the patient a total oral care using the latest technological clinical methods that are based on an evidence-based practice.

The Dr Eliades Oral Surgery and Implantology Clinic is committed to providing the highest quality of oral care possible incorporating the latest dental knowledge, materials, skills and technology and making our patient’s health our priority.

At our Clinic we have created a pleasant and peaceful environment trying to manage the dental phobia and fear from which most patients are suffered. Through the clinical and radiological examination of the patient, we evaluate the pathological conditions of the mouth and teeth and we offer an individual and evidence-based treatment plan according to his/her needs.

The Oral Care Clinic is proud to offer to Cyprus area and international patients a wide array of treatments related to Dental and Oral Surgery and Dental Implants Rehabilitation, including:

As a patient of the Dr Eliades Oral Surgery and Implantology Clinic, you will experience personalized care in state of the art surgical facility that allow us to offer the most advanced, specialized treatment possible.